The visual effects, music and finishing of the Attaché was as big a project as the live-action production. The edit was at the heart of our process, bringing together all the complex and fundamentally ambitious undertaking that makes up the amalgam of the film. Large portions of the narrative required digital set extensions and an installment of the film was performed by CG character. The music and sound design is all original-bespoke for our film and definitely a standout feature.  The color grade and reconform are seamless and powerful.

+
‍
THE MUSIC AND SOUND DESIGN

Because The Attaché is inherently a genre experiment, the ominous foundation of the story  calls for the synth based darkness of the thriller convention. As both a music composer and sound designer, Gavin Little approached the soundtrack with a non-traditional approach, breaking the synth-based expectations of the genre. He used an array of novel organic instrumentation, applying experimental processing to create the film’s unique sound. The storytelling and concept played the lead, focusing on emotional signatures and establishing a literal voice for the Attaché itself.  This signature sound design motif created the spine for the evolving narrative,  and traditional music was only employed where the story and narrative situation called for it.

Sound design assistant Joe McHugh worked tirelessly on all the real world foley editing everything from footsteps to vehicle recordings. 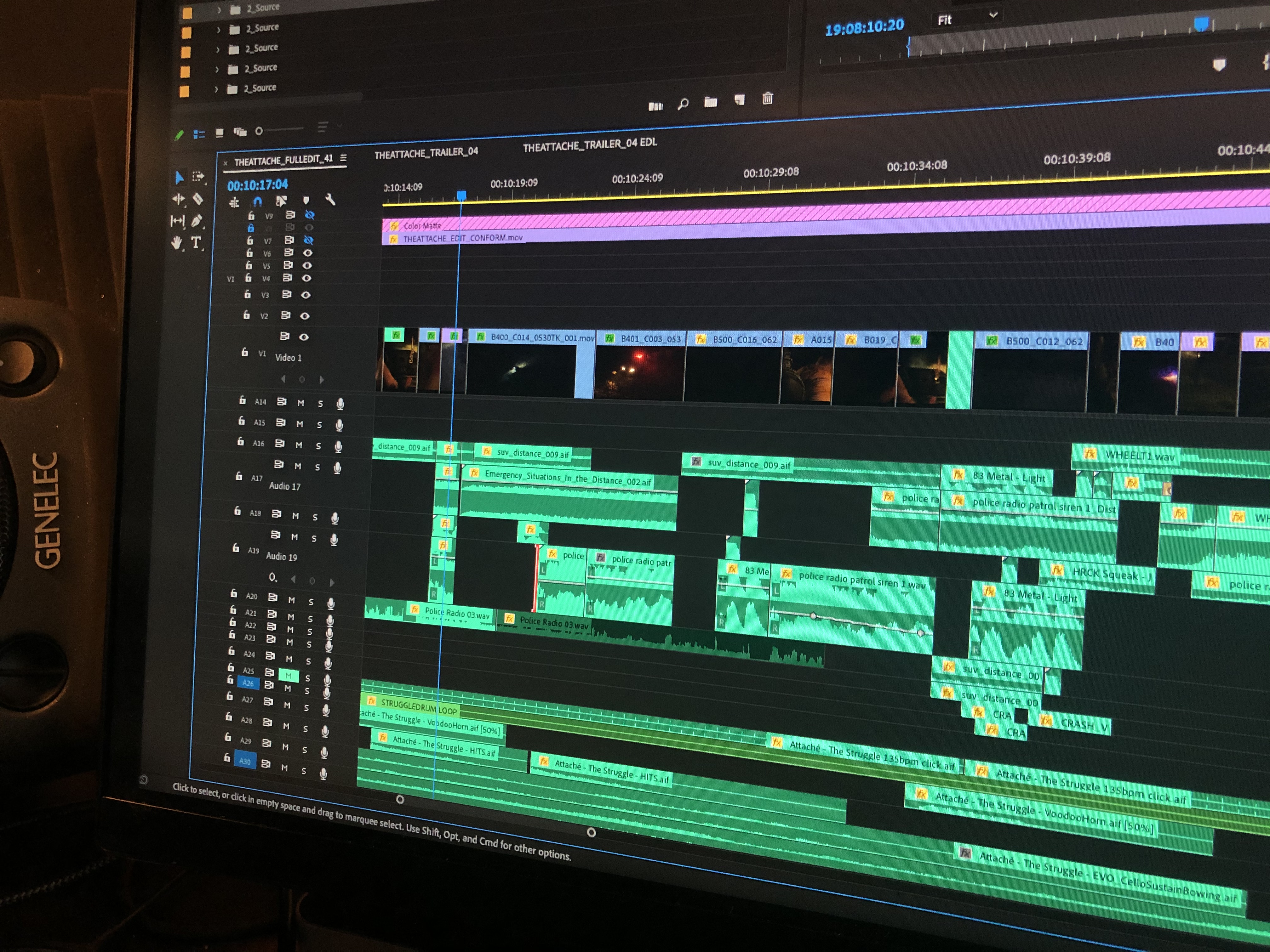 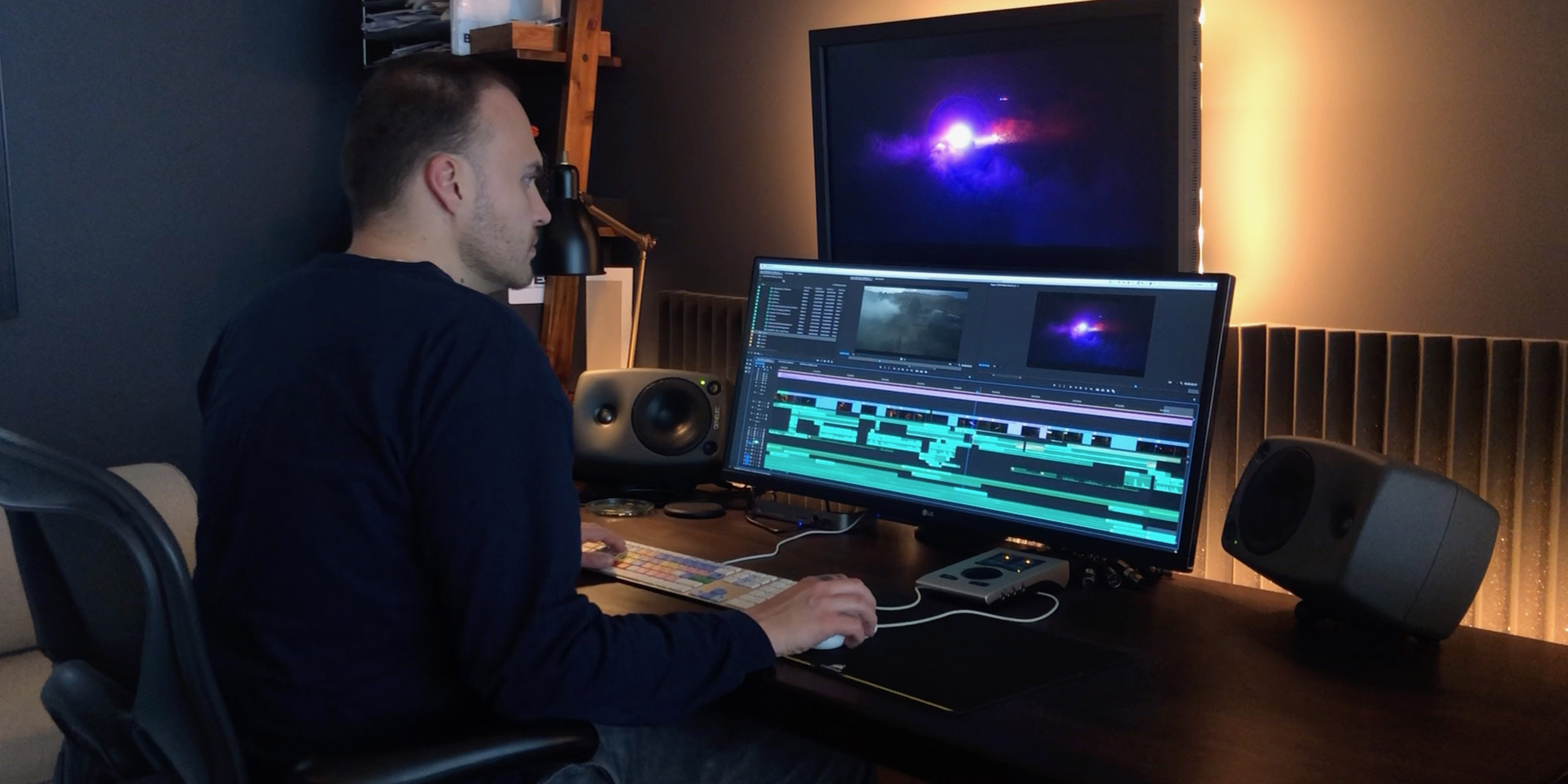 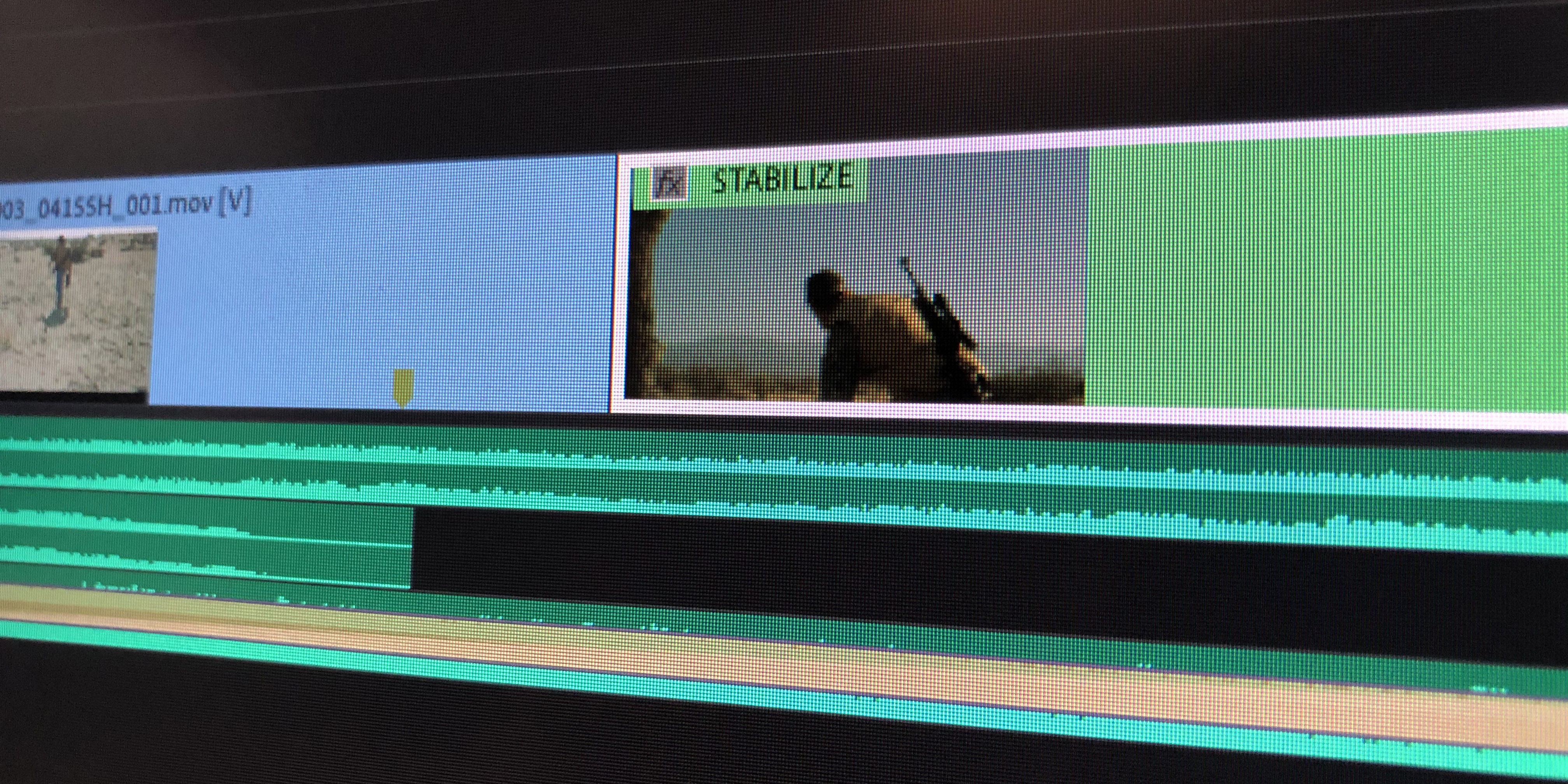 Mischa is an intimate collaborator of André’s and another multi-disciplinarian—writing, editing, and directing his own work. His command over the short form helped usher the unconventional structure of the film to life.  Mischa spent the time to experiment and reorganize the emotional arc of the story many times landing on what became the rippling, episodic style of the final film. From story, to performance, to music and sound design, and finally visual effects prep—Mischa help guide the team through the complex process of finishing.

‍
“It’s hard to make any film and especially hard to make a “self made” film on this scale. André’s multidisciplinary skillset and approach to this really were key in making it happen.
We met multiple times early on as he was writing and we started collaborating on building a structure on paper. That approach rolled over into the edit after principal photography, as we continued writing the film in the edit. The very first thing we started to work on was the big chase scene, which André had shot over the course of one intense night, outdoors in the desert. Any action/chase sequence always requires a lot of angles and shots and is basically impossible to complete in such a short time frame with limited resources. But having André’s expertise in the technical side of cinematography and him owning his own camera gear, allowed us to go back out and capture what we would need with a small crew.
‍
Before we would do so, we would need to know exactly what was missing. So we started editing with what was shot, looked at it and started writing down what else we could think of to make it feel more intense, bigger in scale and more visceral. We then reassembled the edit we had and added black filler with text that said things like “wide drone shot of van shooting down road, FAST”, “Closeup of wheel going off track, BUMPY” and whatever else we could come up with. That gave us an idea of how much we would really need and what the timing, pacing and intensity of the shots needed to be, since we were able to see them in context this way.
‍
I had to adapt my process to that, for us to be able to expand what’s possible for the film in the editing process. Thanks to André’s hands on approach – which is really unique – he then went out and shot whatever else we needed to bring it to life. That really made it possible to realize ideas we were having while working on the edit.” 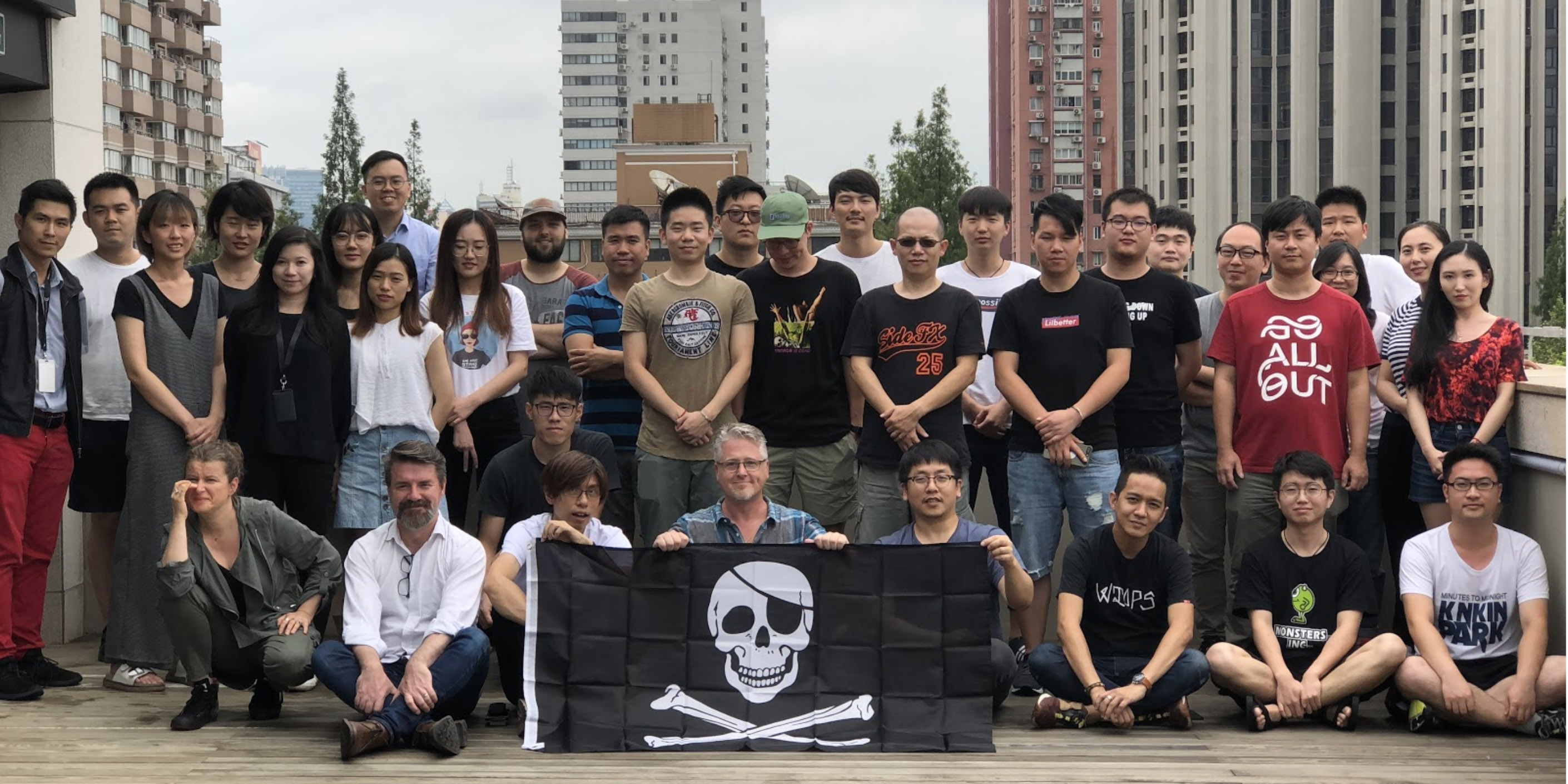 The visual effects effort, handled by Digital Domain Shanghai, and supervised by Executive Visual Effects Supervisor Richard Morton. The finishing consisted of retouching, particle and atmosphere, set extensions, a digital vehicle, and a digital character. They took on the project once we were in the late stages of editing, and had a very clear idea what was needed to finish with potency.  Richard’s command over the dramatic style we were working in was clear and the team of artists working under him immediately dug into developing and ultimately realising the photographic realism that we were looking for.

“Shortly after moving to Shanghai I began contemplating how to expose my commercial team to some more film-like work for training and experience.
‍
Andre was just finishing up the post production on a commercial project at Digital Domain Shanghai when I first learned about his passion short film “The Attaché”.  After sharing the work in progress edit with me I knew it was the perfect project for my relatively young Shanghai team to collaborate on.  It was a nice change of pace from the typical bread and butter advertising work the team had been doing thus far.
‍
Due to the projects we had at the time, my compositing team had bandwidth to take on the loads of compositng work needed on the many airplane crash shots.  With such a great story and visuals, I saw a surge of energy go through the department as they immersed themselves in the shots.
‍
We had weekly video conferences where we reviewed reference and work in progress.  André is one of the most hands-on director I’ve ever worked with, even volunteering to paint several background matte paintings himself. " 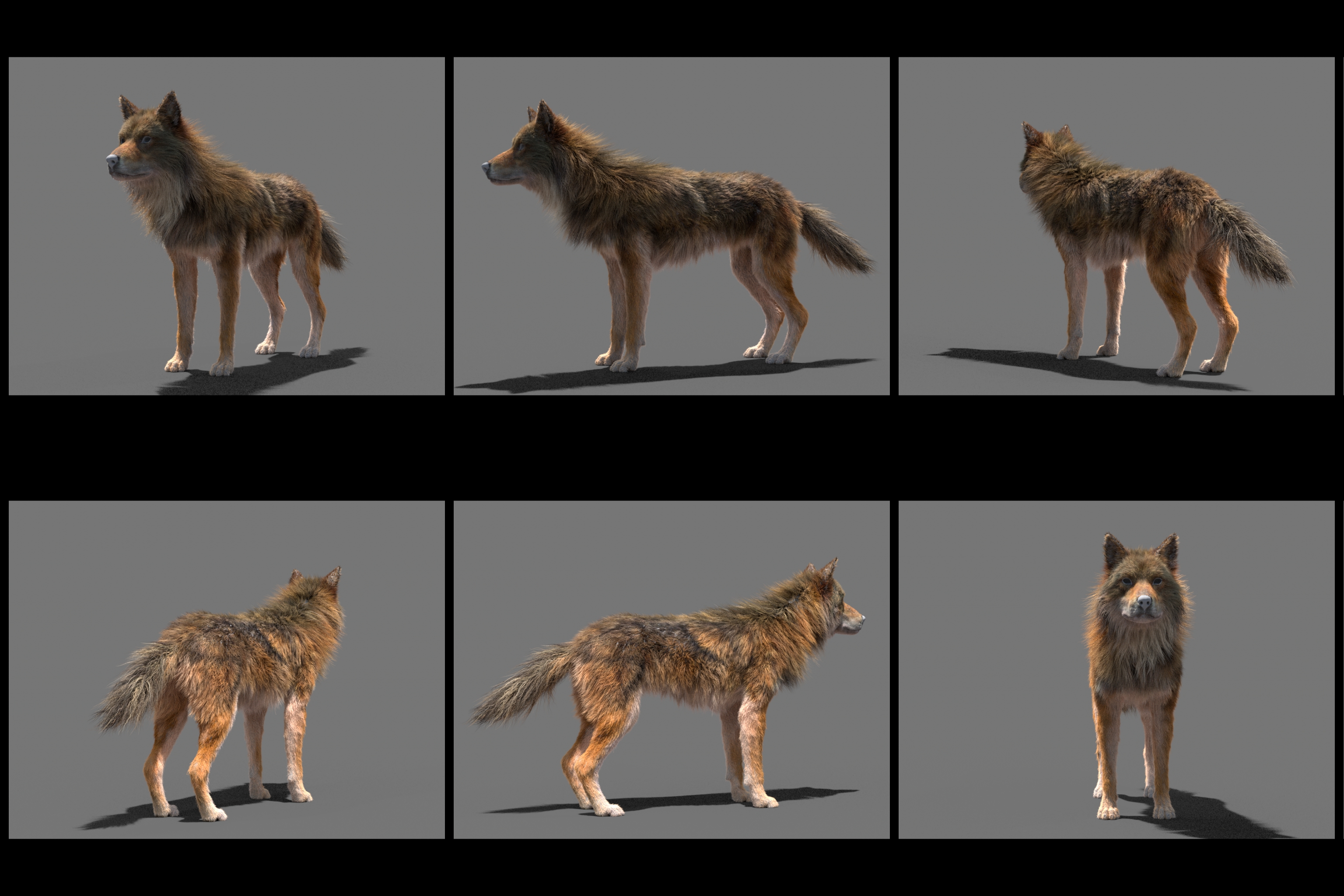 The Wolf was fundamental element in the extension of the basic conceit of the film and we spent more time making this aspect happen than any other single element of the film. Starting from the initial pages in the script, the process of developing the took of  the Wolf was both conceptual and aesthetic. We wrote the Wolf as a dirty, downtrodden outcast—wandering way out of it's zone in a desperate search for belonging, and the realization of that look took shape in the shadowy mange that the team created. The final quality of the Wolf is partially created in the "groom," the stage in which the fur is fashioned, as well as in the lighting and animation phases.

"While the compositing and FX team tackled the plethora of airplane wreckage shots, the asset team began creating the wolf.  We knew developing the wolf would be challenging with such a small crew, but the team was excited about the prospect.  I reached out across the Pacific to my Digital Domain North America colleagues to aid with the rigging and grooming of the fur guides that the Shanghai team ultimately used to shade the fur.  Our Sr Shanghai rigger, Kelly Wang, worked passionately on the animation rig and the muscle system."-Richard Morton
‍

+
‍
Each shot started with the track of the live-action plate and a matching of the movement of the practical case with a CG placeholder. From there the wolf was roughed in to match that case movement. The resulting sketches were the first place where we were able to comment on the realism of the movement and allow the team to refine moving forward.

Once the animation was in a pretty good place, the high-res skin of the wolf was implemented and addition refinement was made to the animation to make sure it was as real as possible. From here the fur was integrated and ultimately moving in context. 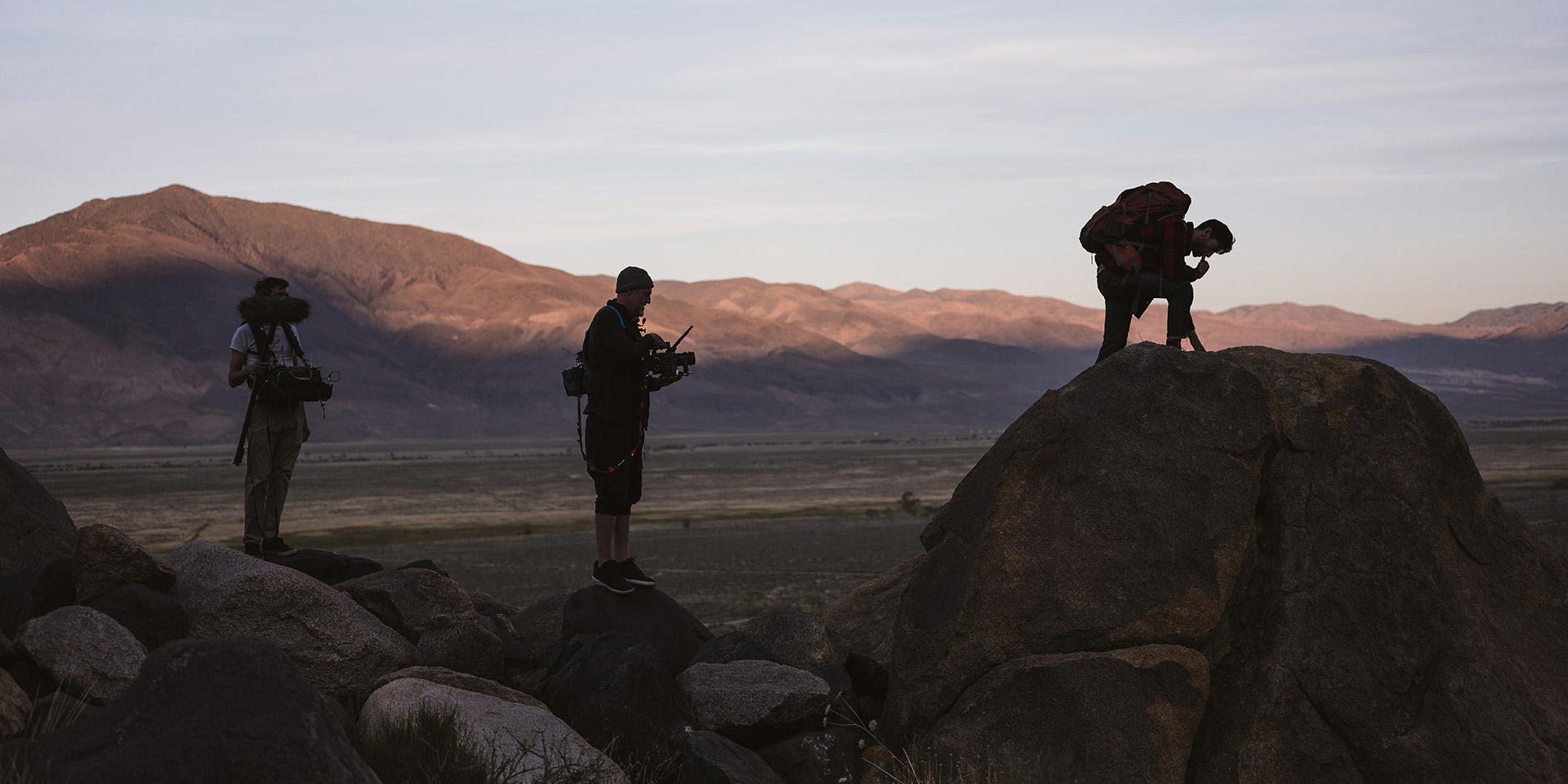 Here you can see the plate with the wolf animation in playblast form. The first shot to come to life in the final look is to the right.

+
‍
"When the wolf look development renders and animation dailies started coming in, a second wave of excitement hit the team as the wolf started to come to life.  We discussed at length with André on how mangie the wolf needed to look, and how the performance of the wolf would fatigue over time from dragging this case across the desert.” -Richard Morton

"What I love about the Airplane sequence is how well the CG effects blend into the practical effects.  Andre shot the sequence with just the right amount of practical smoke, dust and fire, that it gave us a great roadmap of what our CG enhancement needed to match to. Most of the embers and ash were handled by Nuke's particle system, focusing on the subtle characteristics of animation and life span. The bigger smoke and fire effects were generated by our Houdini artists." - RICHARD MORTON

Above you can see how working with a mosaic of moments within the original shot allows us to create a massive, 8K x 4 photorealisc matte painting which the compositors could use to tidy up aspects of the production design that needed help in the takes we used.
‍

Below is the implementation. Before and after.

The ember particle work by Digital Domain is a subtle but impactful element of the visual style of the film. Seamless, yet accentuated by punchy moments of sound design, the dangerous world of the film is heightened by the presence of these elements. 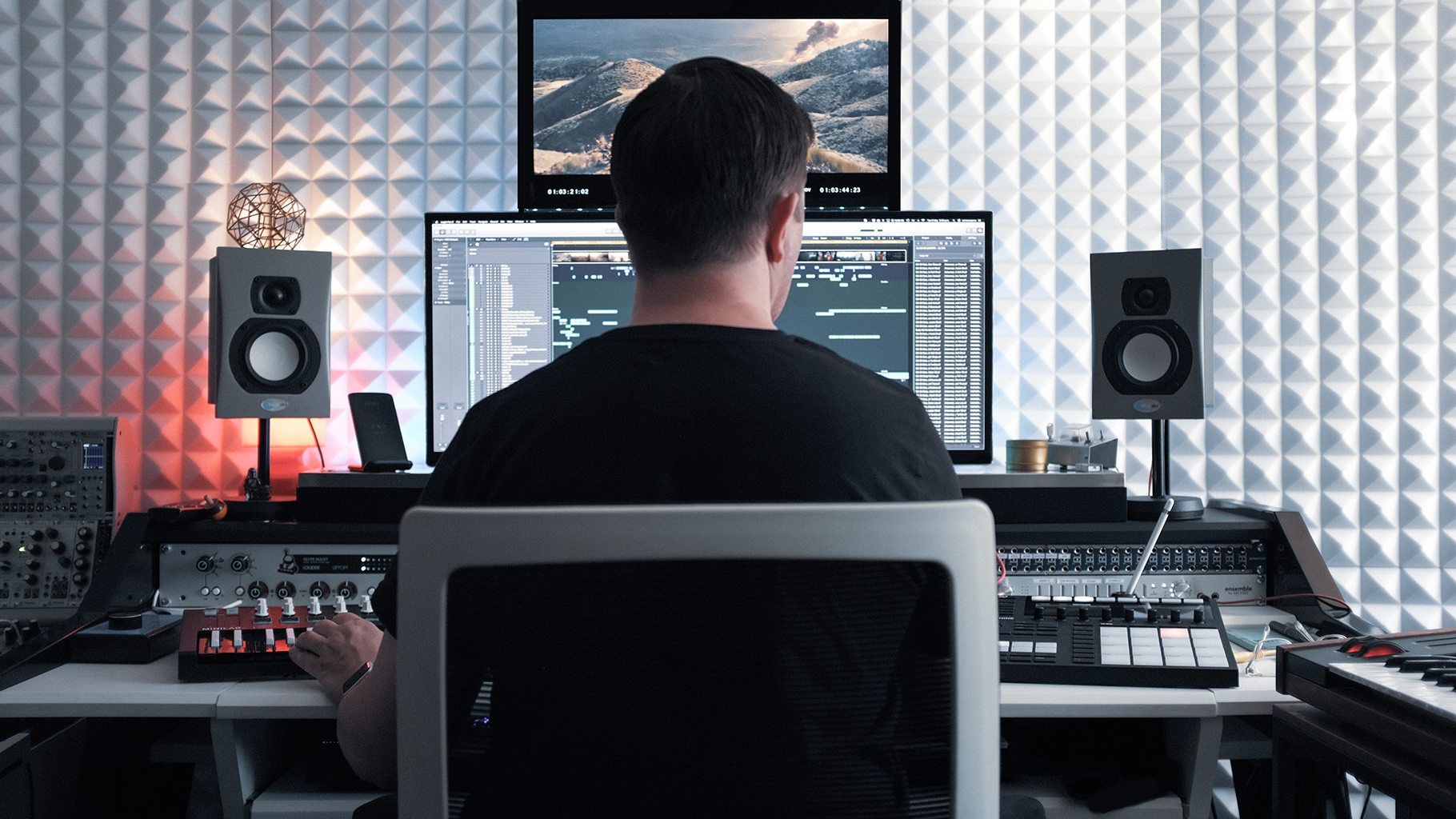 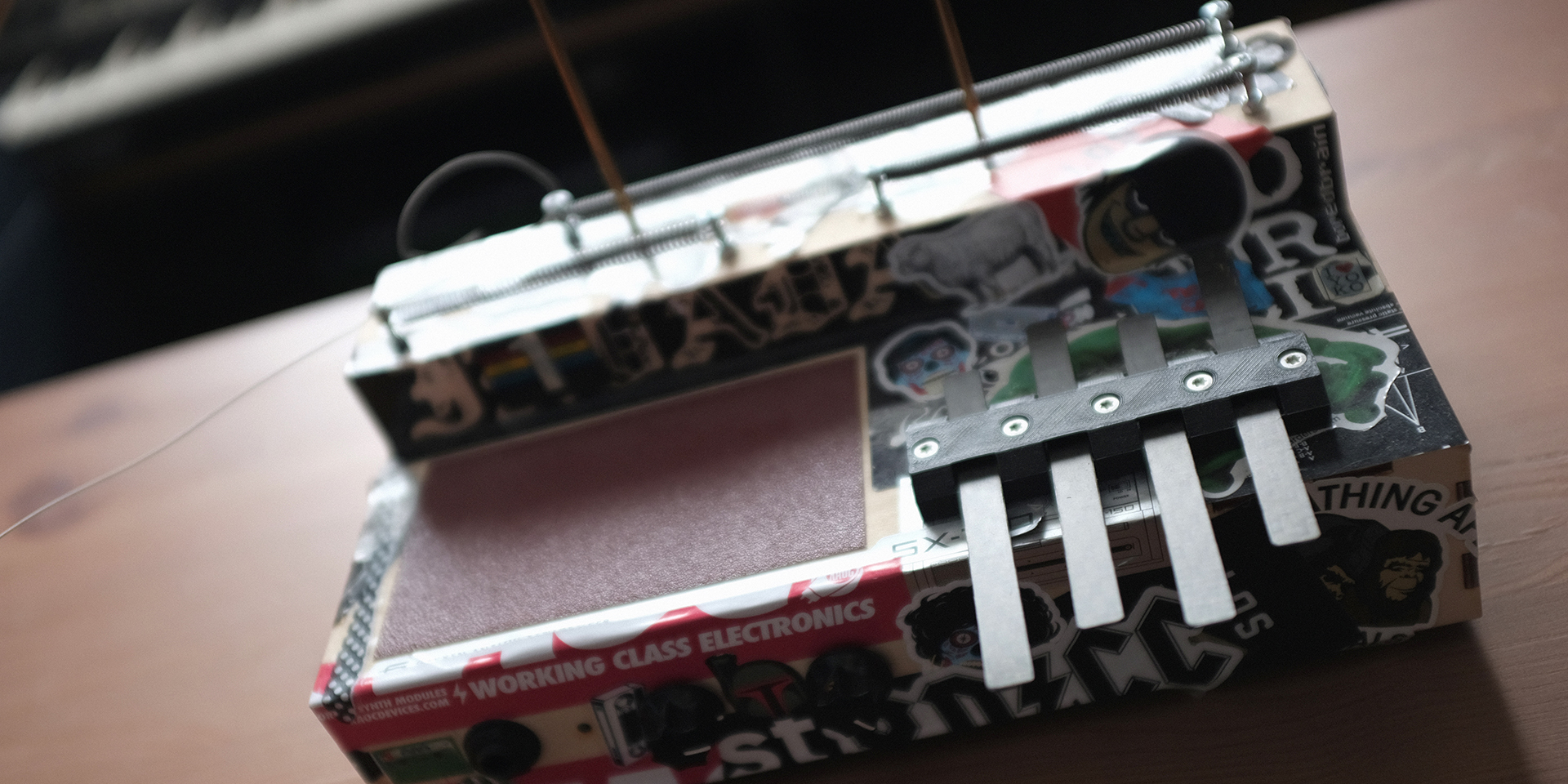 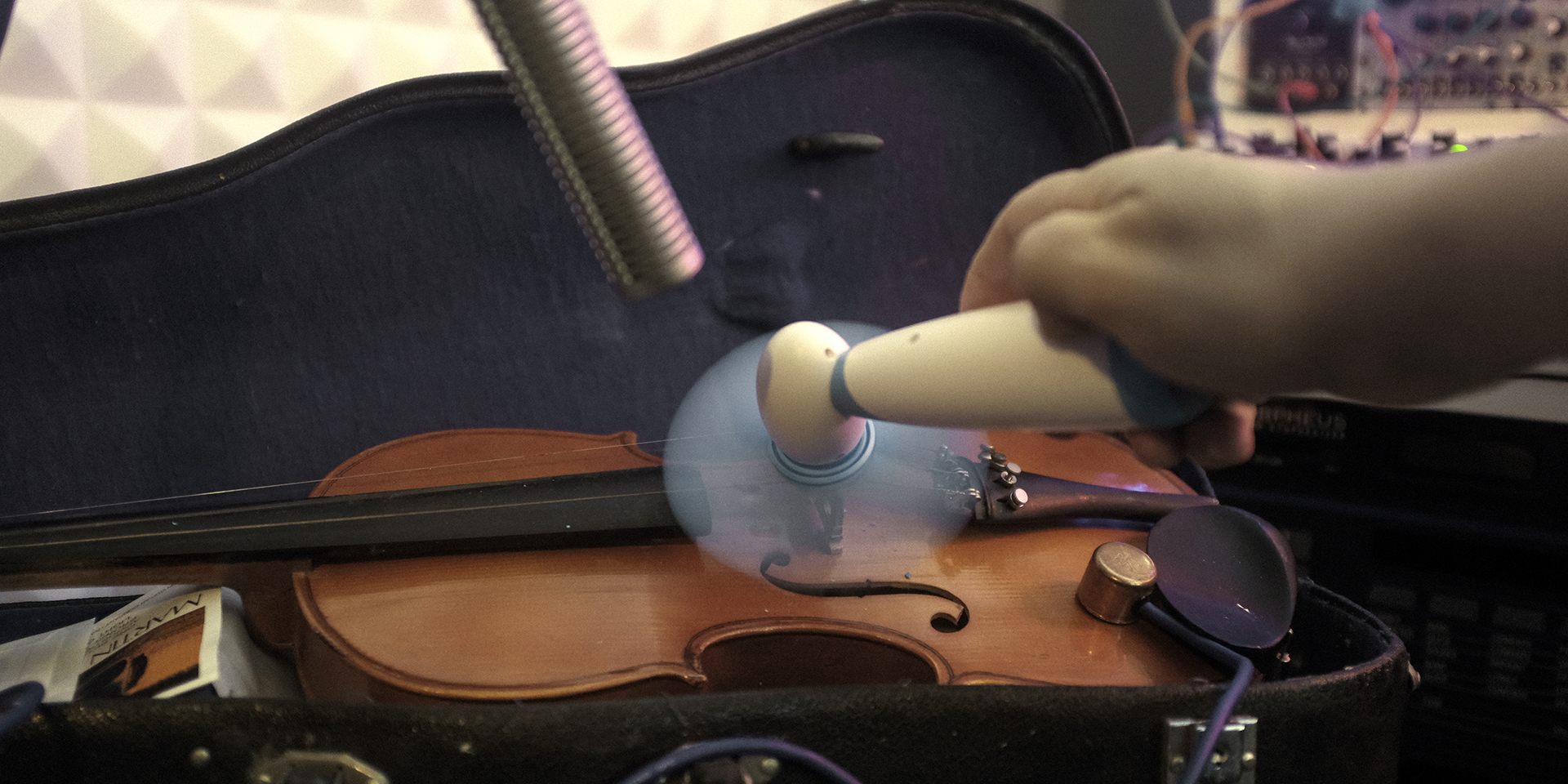 GAVIN LITTLE
‍
Gavin’s work has defined the tone and feel of many of André’s commercials over the years. This process of creating novel score work, informed by Gavin’s love of interpretative sound design marks a standout feature of the Attaché. Gavin set the underlying rhythmic structure of the film with deep anthemic percussion—a grid — with distinct punctuating moments which set the stage for the deep transformation of the characters and thus the storytelling as a whole.

‍
“Right back at the writing stage, André and I began discussing the sound for the film. I found the whole concept of using sound to not only give a voice to the attaché case, but also to allude to it’s African origin story, a really compelling challenge. I searched out African percussion - seed pods, rainstick and shakers - recorded and then processed the instruments to add the voodoo spirit textures to the soundtrack.
‍
When it came to the climactic scene of the film with the baby, I had initially created a very tense textured soundscape to use for this scene. We both knew it worked... but... it felt expected. We met regularly during the production to catch up and discuss the film. During one of these catch ups André mentioned that he really liked when the music - playing on a radio, jukebox or TV - in a film scene became part of the soundtrack. This stuck with me and gave me the idea - if the attaché case has such a powerful effect on anyone who comes in contact with it, it’s power is so deep it could also even effect recorded music that happens to be playing on a TV close by. A child singing a sweet song becomes a threatening voice to finish the film.
‍
This led to me leaving my comfort zone of synthesisers and weird sound making machines and for the first time writing the lyrics for a song. The lyrics start out sweet & playful and as the attaché’s power starts to ramp up and travel to a dark place. For the final production of the song, I collaborated with composer Steve Lynch to score the 1930s style orchestral backing track and vocalist Nicki Gonzales to add the child-like vocals.” 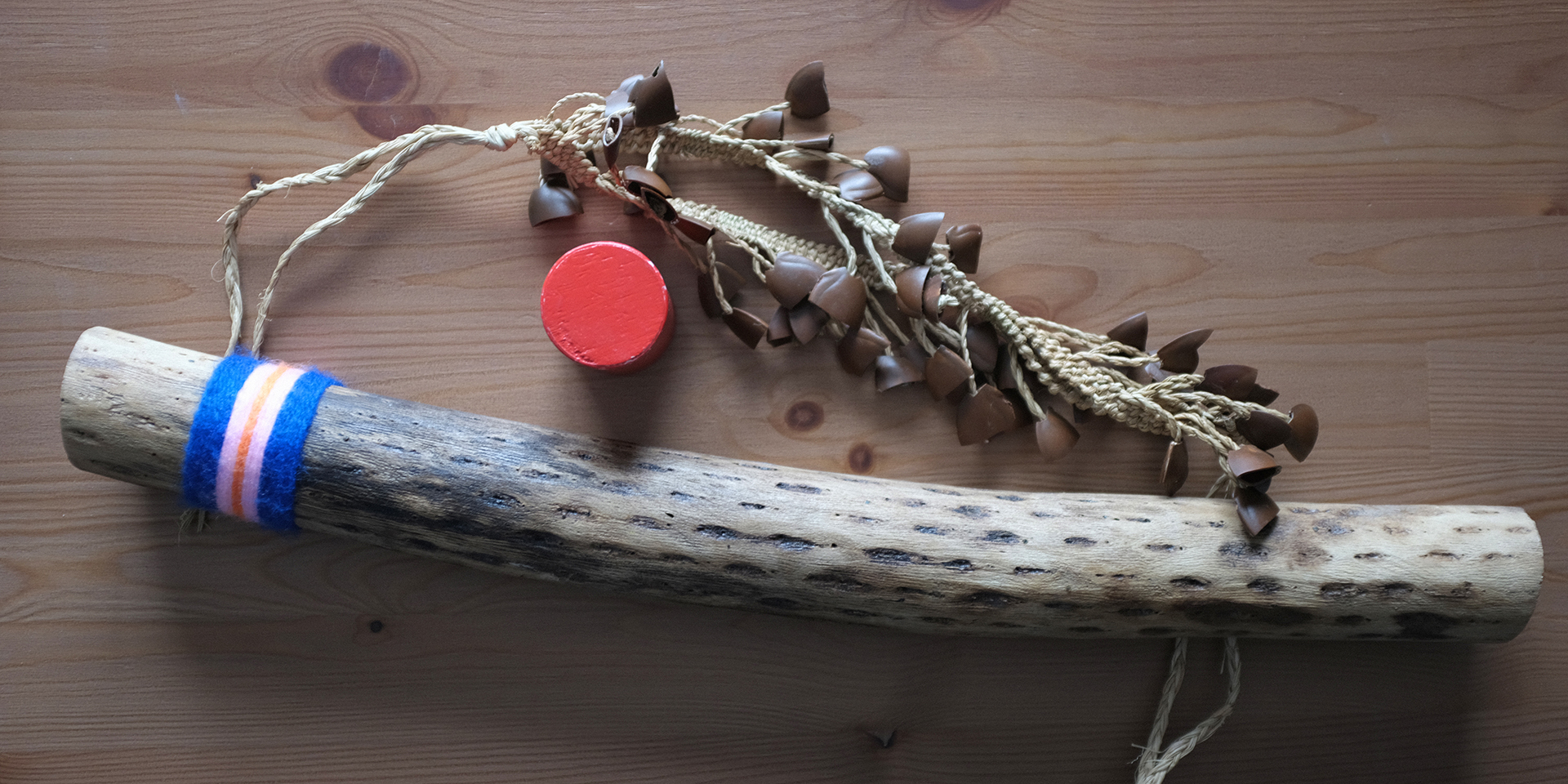